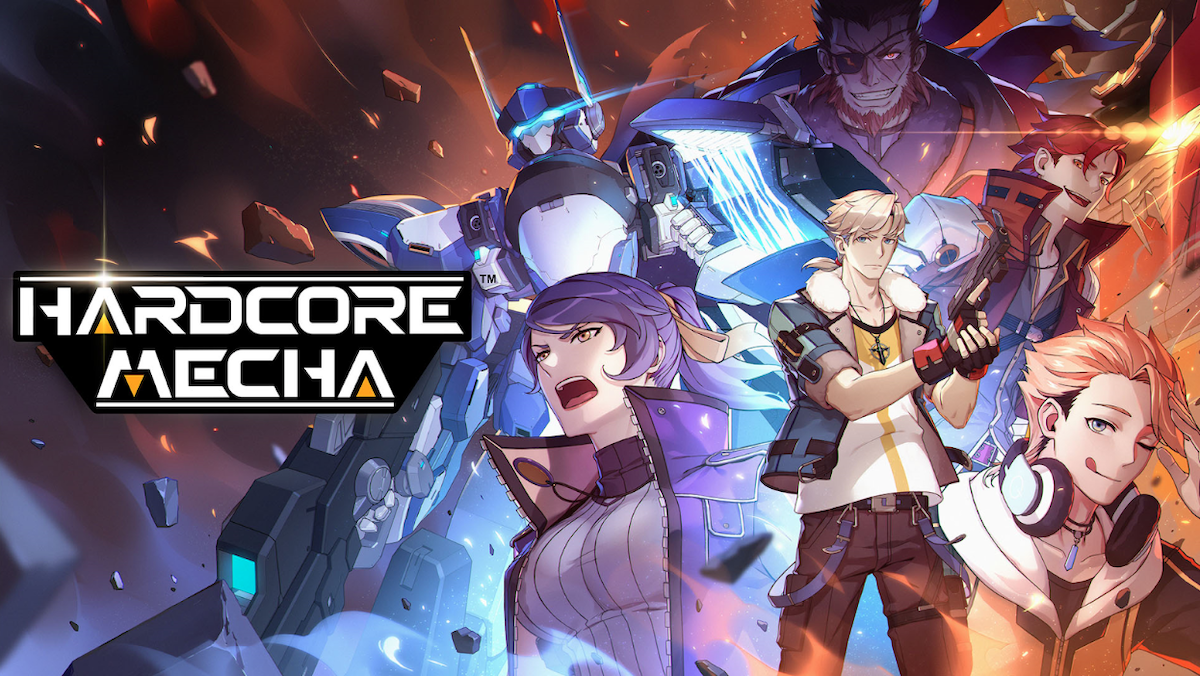 Tokyo Japan, October 15th, 2020 – Global publisher Lightning Games today is proud to announce that 2D robot-combat platformer HARDCORE MECHA has launched on Nintendo Switch via the eShop for £17.99 / $24.99 / €19.99; available fully localised into French and Russian. In addition to the Switch launch, a new ‘GurrenLagann’ DLC will be arriving very soon.

HARDCORE MECHA is a robot-combat platformer where players select their mecha as they embark on a thrilling action-packed adventure filled with shooting, flying and exquisite animations – imagine a mix of Metal Slug and Super Robot Wars! The game features three major game modes: Campaign, Multiplayer, and, later this month after getting an update, fan favourite Survival mode will be available.

Campaign Mode puts you in control of Mercenary Tarethur O’Connell, an ACE pilot of Hardcore Defense Corp, who’s drawn into a rebellious sheme while on a mission. While facing endless battles and overwhelming conflicts, Tarethur starts to question what he is really fighting for. Players will be engrossed in a story of conspiracy and insurgency consisting of 8 chapters with 18 stages ranging from deep underwater, in outer space or confined in urban environments, all gorgeously realized with seamless animated cutscenes. At various points, Human pilots can exit their mechas, giving a greater ability to explore the environment and engage in further platform-based combat. 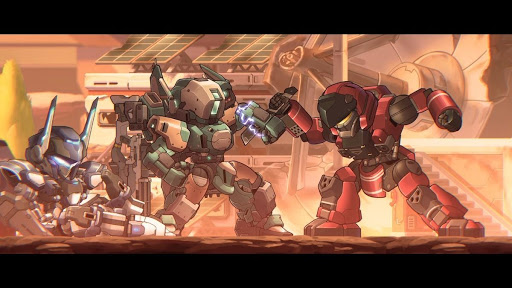 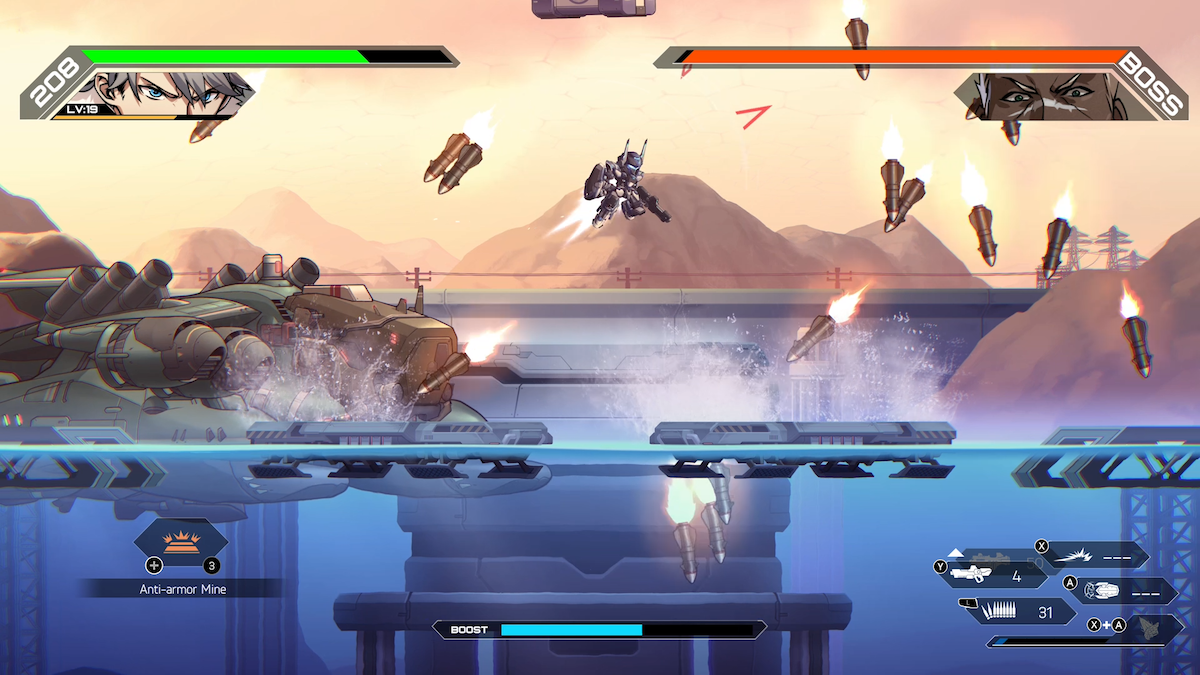 Later this month, after a major update, Survival Mode will come to the Nintendo Switch version. Survival mode pits players against over 50 types of enemy mechas of all shapes and sizes in a variety of locations such as mineshaft, underwater, urban, and space. It's a perfect place to improve your skills as you upgrade your equipment between levels and missions to ensure you survive the barrage of enemies. 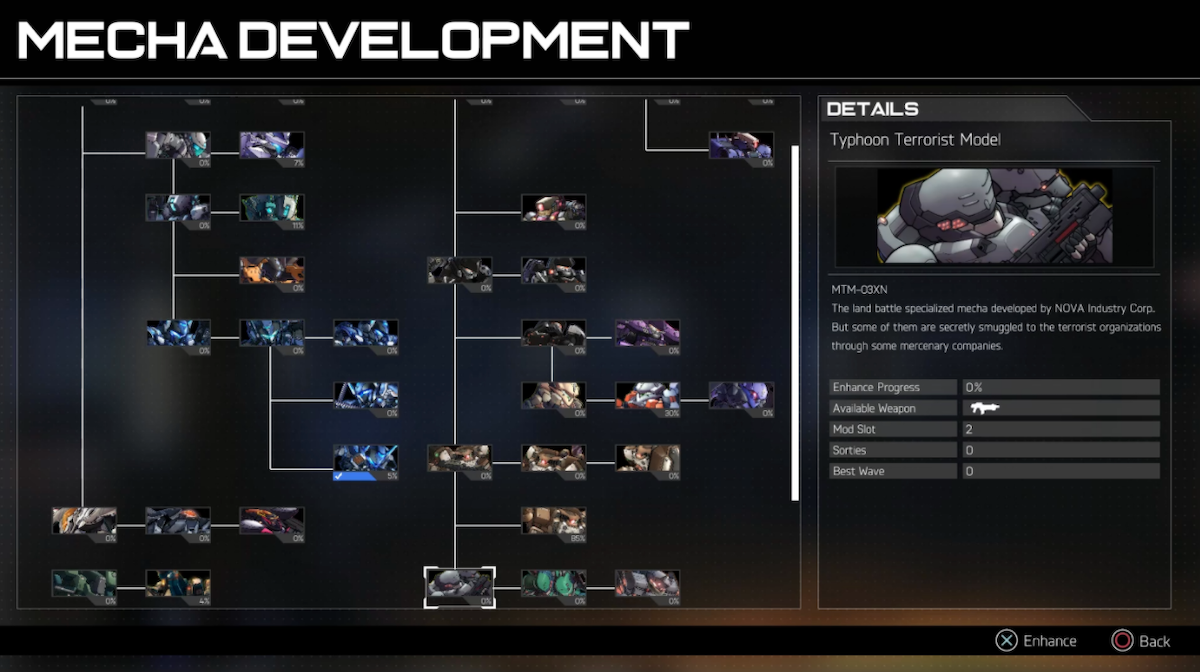 In Multiplayer mode, players select from a impressive roster of customizable mechas and engage in frenetic freestyle combo moves while competing in high-speed hardcore PVP battles. HARDCORE MECHA supports online multiplayer and local split-screen for up to four players. Local Wireless mode is available on the Nintendo Switch allowing players to challenge each other face to face. 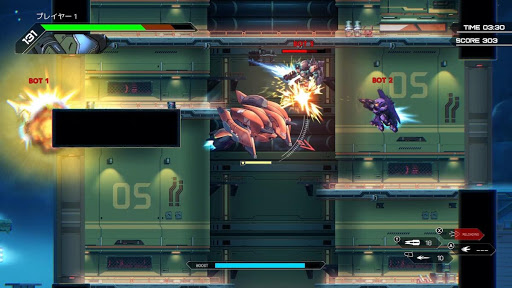 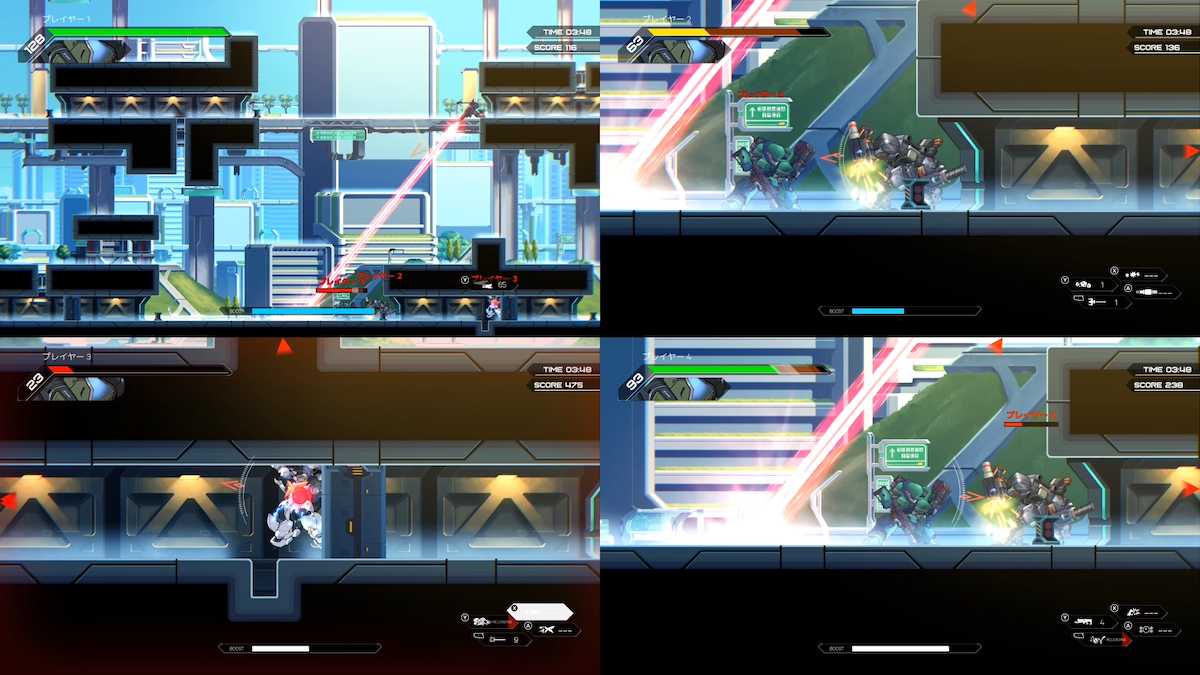 Following the Nintendo Switch launch, a new DLC ‘GurrenLagann’ will become available for Multiplayer and Survival modes. This DLC comes from the famous animation ‘Tengen Toppa Gurren Lagann’ and will include a new Mecha ‘GurrenLagann’, the symbol of the Great Red Lotus Group, and a new young pilot called ‘Simon Digging’. 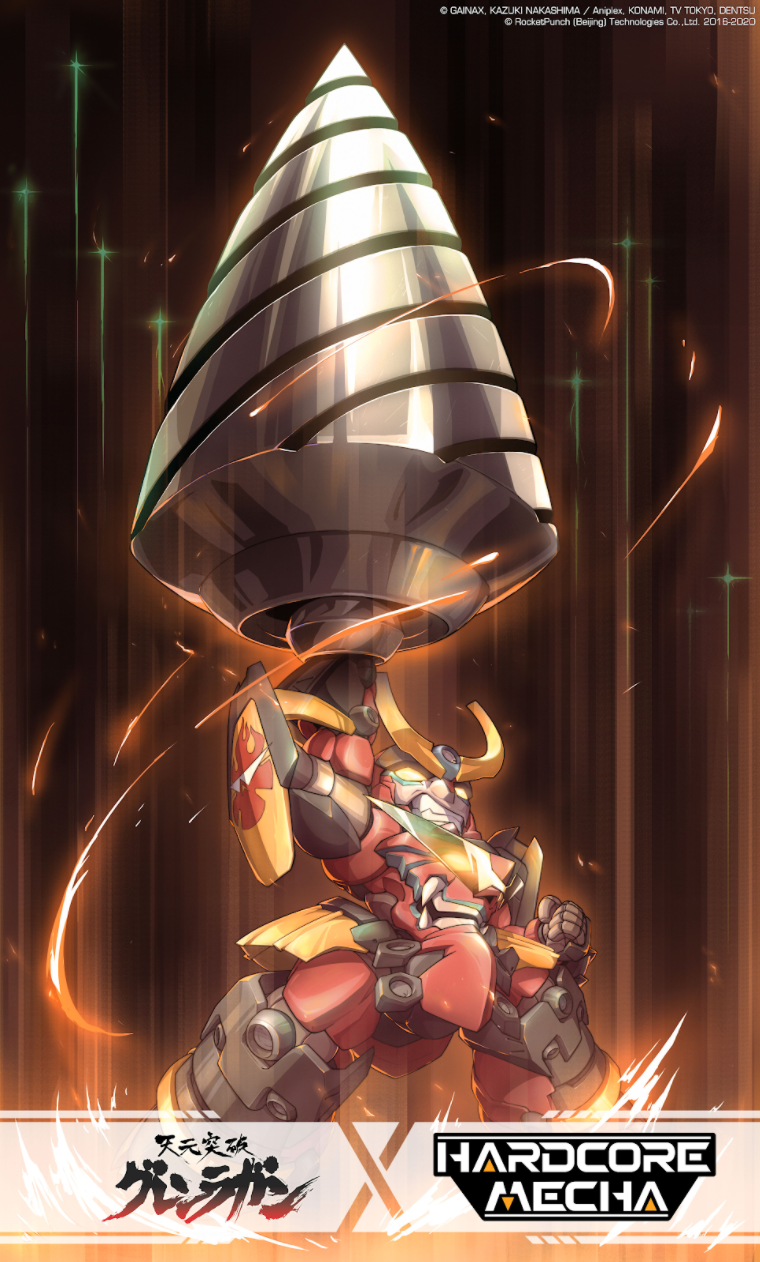 "The team here at RocketPunch could not be more delighted to see HARDCORE MECHA release on Nintendo Switch today. It has been a real passion project for everyone involved,” said Louiky Mu, Producer at RocketPunch. “We spent extra development time ensuring the Nintendo Switch version delivers the most exciting experience possible, in addition to the ability to play at home or on the go. It’s the ultimate 2D mech fighting experience and the Switch is the perfect platform to appreciate it.”

HARDCORE MECHA was first announced back in 2016 and was successfully funded via Kickstarter which saw more than 4,000 backers pledge to the project. Since then, the game has won critical praise for its super slick and fast paced 2D gameplay taking home over 10 indie awards including at the Tokyo Game show, and Developer Award at the PlayStation™Awards 2019. After it’s release, HARDCORE MECHA topped the PlayStation Japan sales chart for weeks, and remained in the top 3 for over a month. 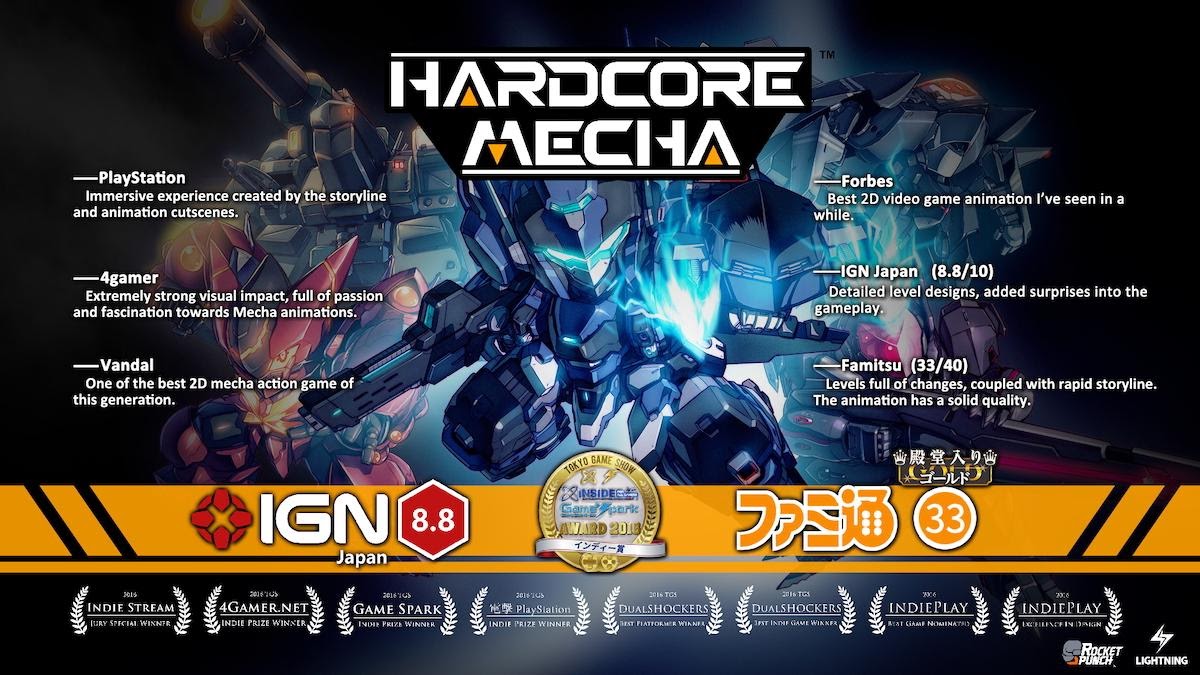 About Lightning Games
Lightning Games is a video game publisher dedicated to delivering quality PC/Console games to players around the world. Lightning Games recently released titles loved by players, including Overdungeon and The Enchanted Cave 2.

About RocketPunch Games
RocketPunch Games is an indie game developer based in Beijing, who pursuits to deliver fun and high-quality video games to players worldwide, onto various gaming platforms. HARDCORE MECHA is the first production of RocketPunch Games, the game was on top of PlayStation Japan sales chart for weeks, and remained in the top 3 for over a month after its release, with the overwhelmingly positive feedback from players and media, the efforts behind HARDCORE MECHA have been recognised.